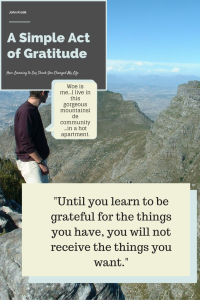 How would your life change if you spent the next year writing a thank you note every single day? One attorney decided to answer that question, inspired by a voice on the mountain (no kidding), a life in shambles, and some excess pre-printed corporate stationary that was soon to have an obsolete address.

On a beautiful New Year’s Day in Pasadena, John Kralik was hiking up a mountain in the always-reliable California sunshine, basically whining to himself about how terrible his life was. He was an attorney with a private practice and clients who weren’t paying him, two ex-wives, a girlfriend who had dumped him, mortgages for homes he wasn’t living in, and a small apartment that he hated. The only bright spot in his life seemed to be his young daughter.

During the New Year’s hike, he heard a voice telling him, “Until you learn to be grateful for the things you have, you will not receive the things you want.” This wasn’t a random hiker sensing John’s morose, bitter inner dialogue, but a message from Spirit of some kind.

With no other real options, John decided to take the advice, and get rid of his corporate stationary at the same time – he committed to writing a thank you note every day for the whole year. He shares his journey with us in his book, A Simple Act of Gratitude: How Learning to Say Thank You Changed My Life.

His note-writing adventure began with his Christmas gifts – all of which he described in a disparaging, bitter way. I found this book completely compelling – Kralik’s description of his bitter “woe-is-me” mindset in the beginning is off-putting but fascinating. He paints a picture of himself as Eeyore-the-twice-divorced-middle-aged-attorney, and throughout half of the book I wanted to smack him.

He complained endlessly about his “boiling in the summer, freezing in the winter” box apartment in Sierra Madre. (If you’re not a Southern California resident, know this is a stunning community in the foothills of the San Gabriel Mountains, with access to some of the most beautiful trails for hundreds of miles.)

He complained about his clients not paying the tens of thousands of dollars they owed him. He complained about the landlord of his apartment and of his office building. Imagine someone whining morosely over problems that 90% of the world would love to have, and you have John Kralik on New Year’s Day.

His only redeeming quality in the beginning of the book was his obvious love and devotion for his young daughter.

The book brings us through his full year of ups and downs – and his growing sense of peace and contentment. He completes his commitment of writing the 365 thank you notes – though it took longer than a year – and he charts for us what changes within him. We get to witness him wake up to all the amazing people, circumstances, and events in his life.

We get to watch him realize that his life is incredible – and we get to watch it become even more so by the end of the year. We get to witness him get closer to his children, his friends, his employees.

It’s a fascinating book, and I highly recommend it. It’s very short – I had the audio version from the library and often ended up sitting in my car a few extra minutes so I could hear what he said next.

My main takeaway from this book: stop complaining about life, start appreciating it instead.