Anita Moorjani was in stage 4B of her cancer when she was rushed to the hospital, suffering from full-on organ failure. It was then that she had her near-death experience (NDE), which would change her life forever, and which, of course, is the subject of her book, Dying to Be Me: My Journey from Cancer, to Near Death, to True Healing. I chose this for Celebration month because Anita’s main theme is that all we need to do in life is to be ourselves, exactly as we are. So in honor of celebrating who you truly are, let’s check out her message.

Her story is fascinating- her family were practicing Hindus from India, living in Hong Kong. She attended a mostly-British Catholic school there, and she said she felt torn between three cultures, never really fitting in anywhere as she grew up.  She felt like a failure as a daughter as well, not fitting into her parents’ vision of a dutiful daughter who would eventually become a dutiful wife. Anita tried hard to fit in, and criticized herself for not being able to do so.

Eventually she got married to a very loving man who accepted her exactly as she was, but she still had trouble accepting herself.  Publisher’s Weekly summarized the rest of the story perfectly in their review:

“In 2002 she was diagnosed with Hodgkin’s lymphoma, and in 2006 she slipped into a coma as her vital organs began shutting down, although she remained aware of everything going on around her. Describing her ensuing near-death experience as a realm of clarity and expansiveness, “a state of being,” Moorjani made the choice to return, and her rapid and remarkable recovery defies all medical understanding. “Realizing that I am love was the most important lesson I learned, allowing me to release all fear, and that’s the key that saved my life,” Moorjani recalls. Her psychospiritual healing, which continues to this day, was self-realization: of her own magnificence, of oneness with universal energy and with a universe comprising.” (http://www.publishersweekly.com/978-1-4019-3751-5) 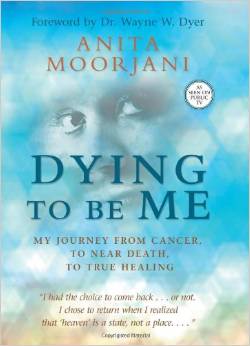 I found this well worth reading and recommend it, though I do think it would have been an even more powerful story if the book was 2/3 of its current length. Anita’s positivity and unique perspective makes for a fantastic read. I’ve created a PDF file for you with a few of the quotes from the book, which you can get here. What I’d like to focus on today is her take on judgment and non-duality. I love this, and I’m going to warn you that it might push some of your buttons, because it did mine.

Here are a couple of quotes from the book:

“Whenever I had conversations about illness, politics, or death, my views were so radically different because of my experience that I simply couldn’t involve myself in the topics. I began to realize that my ability to judge and discern had become ‘impaired.’ I was no longer able to draw definite distinctions between what was good or bad, right or wrong because I wasn’t judged for anything during my NDE. There was only compassion, and the love was unconditional. I still felt that way toward myself and everyone around me.”  (Moorjani, Anita. Dying to Be Me: My Journey from Cancer, to Near Death, to True Healing. Kindle Locations 1950-54.)

“This meant that I was no longer able to view the world in terms of ‘us’ and ‘them’ – that is, victims and perpetrators. There’s no ‘them’; it’s all ‘us.’ We’re all One, products of our own creation, of all our thoughts, actions, and beliefs. Even perpetrators are victims of their own self-hatred and pain.” (Moorjani, Anita. Dying to Be Me: My Journey from Cancer, to Near Death, to True Healing. Kindle Locations 1962-65.)

For me, this is a very easy thing to examine and admire in the abstract – of course we are all One, and no one deserves judgment. However, when it comes to the people I routinely judge, it becomes a lot harder. Judgment often feels very righteous and safe, and it can be really challenging to let it go.

In honor of Moorjani’s judgment-free message, I would like to invite you to try this exercise with me:

Step #1: Pick a group of people who you judge and feel not only justified about judging, but possibly morally superior for doing so. (If you need help, here’s a potential list: pro-choice advocates, pro-life advocates, republicans, democrats, people who discriminate against gay people, people who fight for gay rights, NRA lobbyists, arms-banning lobbyists, etc.)

Though it is hard to publicly admit who I judge and feel justified and morally superior for judging, I will do so for this exercise: I judge the members of the Westboro Baptist church.

Step #2: List out the top three reasons why they’re horrible and you’re right to judge them.

Mine:    -they preach hate
-they twist spirituality and religion to hurt people instead of love them
-they target LGBT people, and in my mind, we have enough sh%t to deal with already

Step #3: Take a moment to sit with the energy of the judgment and describe how it feels in your mind, in your body, and in your soul.

Mine:     -mind: completely credible and righteous
-body: throat is tight, feel tears in my eyes
-soul: interestingly, my soul kinda chuckled, like I might at a two year old stomping her foot

Step #4: Imagine being a member of a group you judge, taking part in a typical activity of the group. Then sit with the energy of how you feel as this person and describe how it feels in your mind, your body, and your soul.

Mine:    -mind: righteous, morally superior
-body: chest constricting, throat is tight, feel tears in my eyes
-soul: flooded with compassion for me

Step #5: Imagine the person you love most on the planet comes to you and confesses that they have joined this group you judge and are now afraid you are judging them. (They’re likely right! If you are like me, this is the hardest step so far!) Write out (or say) what you would say to them.

Mine:    “Okay. I’m a little scared because I think you joining this group means you are judging me and you are scared that I am judging you. There is no way that I will stop loving you, and we don’t have to both have the same values for us to respect each other’s choice of what to believe.”

Though again, this one was hard, and even in my imaginary conversation, I was offended and hurt and had a hard time getting to this statement. Ouch!

Step #6: Imagine this same person asking you to attend a group meeting with them in order to have a greater understanding of the group. Visualize going and holding only a space of love for the people of the group, while disagreeing with their message. 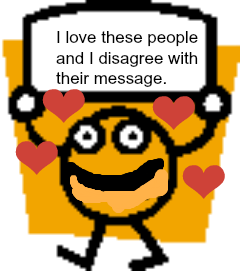 (I can imagine what would happen if instead of violent hate towards Westboro protests, we all went out and smiled at them and gave them cookies, while disagreeing with their message. Could they keep up the hate in the face of that? Are we feeding their judgment by judging them so harshly?)

Step #7: Imagine the whole world taking this stance about all issues – these are wonderful, loveable people and I disagree with their message or actions. If this happened, I think we would create world peace within a generation.

In the end, I can’t disagree with Anita Moorjani on this one, though I know I have a long way to go before I can live this ideal all the time. I’d love to hear how this experience was for you. Leave a comment and let us know what it was like.