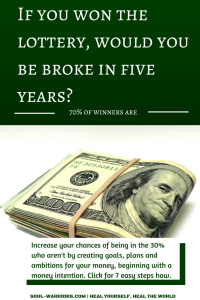 Do you have any idea what you would do if you received a sudden windfall? Would you be one of those people that spent everything within the first five years and had to figure out how to survive on an average income again?

For example, when I was in my early 20’s, I received $40,000 (after medical expenses of $60,000) in an insurance settlement from a car accident that left me hospitalized for weeks. What happened to that money?

I took several of my favorite people on really amazing trips. I bought fake potted plants at Costco for hundreds of dollars each. (I thought they’d look cool on my patio. They didn’t; they collected Los Angeles smog until they looked like they had survived a fire.)

I bought clothes. I bought crap that cluttered up my house that I eventually donated.

I honestly don’t remember where the money went any more. Nor do I think I even knew where it went then.

I remained this unconscious with money for more than another decade. I worked at jobs I hated because they paid well and allowed me to be unconscious about money and live within my means and the limits on my credit cards.

In 2010, I created my first money intention, and that’s when things began to change for me. It was this: “I am in the process of developing mastery with money, creating a powerful relationship that allows me to follow the dreams of my heart.”

In the last five years, I have radically transformed my experience with money. In 2011, I made good on the ‘supports me to follow the dreams of my heart’ part, and have continued to value my dreams over my financial ease.

Just in the last two years have I started developing mastery with money, understanding what’s coming in and out, seeing the true price of debt, negotiating for loans, developing plans and actually using a budget.

Sometime in the end of last year, this intention fell off my wall, and I realized I can actually say now that I have developed mastery with money and have created a powerful relationship that allows me to follow the dreams of my heart. Yay, me! It feels incredible, even though I’m living with way less money than I ever had previously.

I didn’t spend a lot of time dwelling on this intention either. I created it, I write it on a notecard, and stuck it to my wall being my computer, where I might read it occasionally.  That’s it. I didn’t strive towards it; I didn’t even realize I had ‘achieved’ it until it (literally) fell on my head. To me, it just shows how powerful having an intention can be.

In the next three weeks, we’re going to craft intentions for three major areas – money, health, and relationships. I’ve called these out specifically because each of them shares elements of the “magic pill” quality for the majority of us.

You know, the magic pill – the one that, once you have it, will improve your entire life in some dramatic way.  Then you’ll be happy. Then you won’t have to worry so much. Then you won’t feel so alone – etc., etc.

We all see stories (like this…or this) of lottery winners who end up bankrupt (or jailed!) within a few years. According to a Reader’s Digest article, 70% of all winners lose or spend all of their money within five years or less. (Linked here.)

That still leaves 30% who go on to really enjoy being suddenly wealthy from their lottery wins. According to Stephen Danish, Psychology Professor of Virginia Commonwealth University, the key to being in the 30% is having clear goals, plans and ambitions before ever winning. Danish has become an expert on the matter, and has been hired by the Virginia State Lottery to help counsel winners.

“He once told the Roanoke Times that he can tell how well (or badly) somebody will handle a lottery windfall when he hears them talk about their future: If they talk only about spending, he says, he knows they’re in trouble; if, though, they talk about what they want to accomplish with the money, he knows they’re going to be okay.” (Source: “How Lottery Winners Spend Their Money”, ABC News, http://abcnews.go.com/Business/lottery-winners-spend-money/story?id=17937656)

Today, we’re going to become people who talk about what we want to accomplish with our money by creating a money intention, using the same process outlined in last week’s post. We already did Step #1 (choosing your area of focus – money), so it’s straight on to step #2:

Get clear on what type of outcome you’d like to experience with money. How would you like to use it? What is your end goal? If you considered money to be a completely neutral tool, how would you ideally use it?

My previous intention was very clear…though it didn’t say anything about the amount of money I would actually have. And I managed to ‘achieve’ that intention while being fairly broke, so be sure to include all aspects of what you would like.

My example:
I want to build wealth for myself, using my gifts to freely bring in streams of money and letting my money work for me. I also want to freely distribute streams of money, allowing money to flow through me to others who are actively improving the world with their gifts.

Do you want to work really hard for this money? Do you want money to come to you in easy, fun ways? Do you want to learn a lot along the way? Do you have specific experiences that you’re curious about that you would like to include?

My example:
I want to experience ease, fun, divine timing. I would like to create these money streams from activities that are pure joy.

Step #4: Decide How You Want the Experience/Process to Feel

My example:
I want the experience to feel joyful, fun, magical, and easy.

As discussed last week, brilliant writer Anne Lamott recommends putting together a first draft that you already know will be a piece of crap. We’re taking her advice here, and just mashing together your favorite elements of the previous three steps preceded by some version of “I am in the process of…”

My example:
I am in the process of easily building wealth for myself, joyfully using my gifts to bring in streams of money, letting my money work for me with magic and divine timing, and freely distributing streams of money to others who are actively improving the world with their gifts.

Step #6: Refine it to the Essence

Try to cut out any unnecessary or repetitive elements and shrink it down to one sentence.

My example:
I am in the process of easily building wealth for myself, joyfully allowing money to flow to me and through me to others who are actively improving the world with their gifts.

I take the advice of the woman who taught me how to write intentions, Vicky White, when it comes to finalizing the money intention. Her test was, “does it make you want to leap out of bed in the morning?”  If yes, you’re done. If no, it needs some revision. Keep playing with elements until you can’t wait for it to happen.

My example:
I am in the process of easily building wealth for myself, using my gifts in fun, joyful ways to allow money to flow to me, and through me to others with love, grace, and magical blessings.