It’s our final week on the Inner Lizard series, which means we get to look at my very favorite lizard-soothing strategy, best used when you start to feel like your inner lizard is the one running your life. One of my favorite moments in coach training was inspired by a discussion of this topic, when my fellow trainee said, “I’m living in Jurassic Park.” Over a year later, I still laugh at that line, and think of it anytime my inner lizard is in a particularly intense, vocal mood.

You all remember the kitchen scene from Jurassic Park, right? The one where the dreaded Velociraptors were hunting the poor kids, stalking them, opening doors with their giant claws, terrifying them (and us) nearly to death? Yes, that one!  You’ve been listening to Dr. Grant talk about the raptors for the entire movie, with quotes like,

“…you keep still because you think that maybe his visual acuity is based on movement like T-Rex – he’ll lose you if you don’t move. But no, not Velociraptor. You stare at him, and he just stares right back. And that’s when the attack comes. Not from the front, but from the side, from the other two raptors you didn’t even know were there. Because Velociraptor’s a pack hunter, you see, he uses coordinated attack patterns and he is out in force today. And he slashes at you with this – a six-inch retractable claw, like a razor, on the middle toe. He doesn’t bother to bite your jugular like a lion, oh no … he slashes at you here [makes slashing motions below the child’s chest] or here … [above the groin] or maybe across the belly, spilling your intestines. The point is … you are alive when they start to eat you. So you know … try to show a little respect” – Dr. Alan Grant (Jurassic Park. Dir. Steven Spielberg. Universal Pictures. 1993)

If you’ve experienced a full-on inner lizard freak out, this sounds just about right. Naming your lizard, staring at a cute lizard picture – none of these things help when you’re in full-on dinosaur mode. When this happens, we have to go for something way stronger – the truth. Start asking questions about your lizard beliefs. Do some research. See if there is any evidence at all to support your claim from your own life.

One of my clients had a huge fear about not having enough money. She’s retired, living on a fixed income but doing so well within her means with no foreseeable reason to fear. We were doing some work around money, so that she could have the mental security to enjoy the comfort that she has, and I asked her what would be the very worst case scenario.

The what? Turns out when she was little, there was such a place, and her parents sometimes used it as a threat when she asked for something she wanted. Think “money doesn’t grow on trees,” with a little more menace.

(“Whatever” my own inner lizard chimed in, “at least she wouldn’t have to be homeless.”)

She did some research and discovered that there is no such thing as a poorhouse any longer. She went on to then do a realistic worst case scenario – what if she was unable to support herself? Well, she has children who love her and would support her. She has friends who would take her in. She has a sharp mind and the ability to work.

So when you’re surrounded by dinosaurs, try asking yourself questions like this…

Finally… did you know that the terrifying Velociraptor was, in fact, the size of a turkey? Seriously! I don’t know about you, but I can’t imagine hiding behind a steel cabinet, waiting in terror while three turkey-sized raptors came to get me. 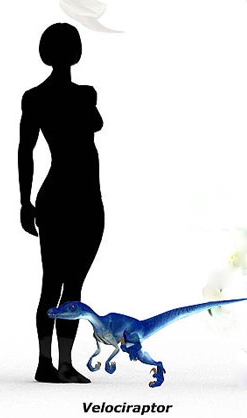 Leave a comment and let us know what truth you found out about your greatest lizard fear!