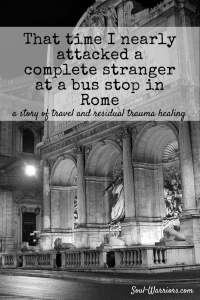 Have you ever felt like there is something in you that still needs healing, but it’s something you can’t quite pin down with words? All the therapy, processing, emotional thought work, and even physical release techniques just don’t seem to work, but you still have a sense there is some soul shrapnel that needs to be removed?

I felt like that for a few years after therapy and into my coaching practice – like there was some small, wounded part of me that I couldn’t get to, that was still locked up in past trauma but was inaccessible by any means I could find. This is the story of how I was finally able to heal that part, in the weirdest possible way, one dark night in Rome.

My mom, sister and I were strolling down the Via del Corso looking for a restaurant to celebrate our next-to-last night together in Italy when things got a strange. Despite being in an elegant, upscale area, my sister got an ominous vibe that reminded her of one of her childhood nightmares. Soon after, my mom had a flash of seeing her brother on the street, though he had died several years prior.

This might seem completely there out there, but you have to understand that in addition to spectacular architecture, gorgeous men, incredible fashion and the best olive oil on the face of the planet, Rome has pockets of some seriously creepy energy. 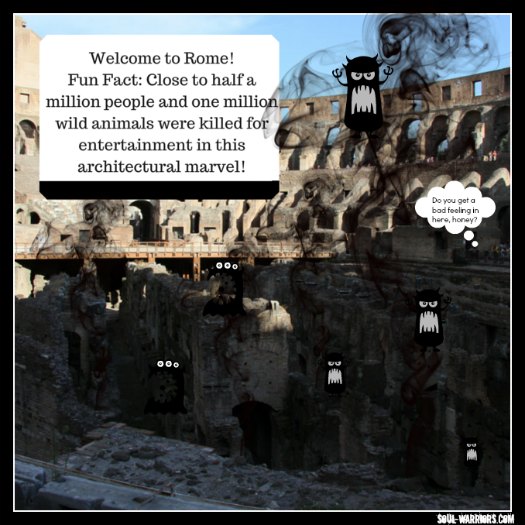 I’m not sure what it is – I suspect the long and often tortured history, but I don’t know. One or more of us had been creeped out in several places over the prior days, so instead of freaking out about it, we decided to leave the neighborhood in search of a happier dining experience.

We headed to the closest bus stop, where we were soon joined by a man who was very close to a cartoon version of the worst parts of my father. He looked like a businessman, but had the energy of Stephen King’s Pennywise the clown.

If you haven’t read King’s masterful It, here is a brief version of the premise from Wikipedia:

“The story follows the exploits of seven children as they are terrorized by the being, which exploits the fears and phobias of its victims in order to disguise itself while hunting its prey. ‘It’ primarily appears in the form of a clown in order to attract its preferred prey of young children.” http://en.wikipedia.org/wiki/It_(novel)

My sister and I were instantly on alert. We recognized this type of predator in a heartbeat – someone who feeds on the terror it creates in another person. We’d grown up with this flavor of fear, and for a moment, we both froze, as he darted too close to us, leering and making exaggerated facial expressions, with a sinister glee in his eyes. 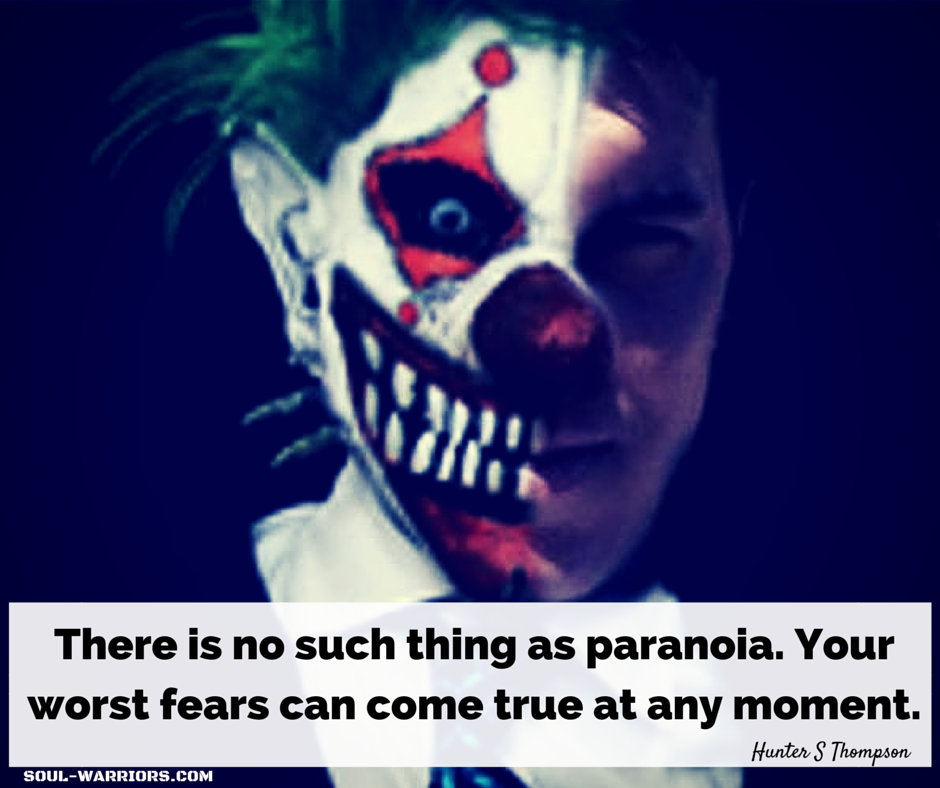 One of the reasons I always struggle to explain exactly what was so disturbing about my father is that it’s nearly impossible to convey the type of menace he exuded with just words.

He was a living contradiction – someone who would threaten very subtly to kill our pets if I didn’t do what he wanted, taking pleasure in the deep fear he was creating in me. He would be the first person to help a stray animal and would never actually hurt our dog (he adored her) but I didn’t know that.

The worst part for me was knowing how much he enjoyed scaring me, and still feeling the fear anyway. It felt like letting him win, and that led to a huge amount of shame.

I processed this is therapy – a lot. I got coached around the ideas I had left over after therapy. I did rage workshops where I screamed at my dad at the top of my lungs while beating a giant cushion with a bat. I did hypnotherapy to release any stored emotions or freeze response trapped in my body. I took self-defense to know I would always be safe.

But how do you access stored terror? I’d gotten great at processing rage, shame, grief, despair, and nearly every other emotion on the spectrum. How do you recreate visceral fear in a therapist’s office?

I never could. So the Divine did it for me, and sent this man to the bus stop. In the moment of encountering him, I was a shaking, terrified, frozen child again.  He would hurt my family and make me watch. I stopped breathing, shrunk and prayed he would go away.

I exchanged one glance with my sister, and saw all that terror reflected right back at me.

And then something shifted. I wasn’t a child, but an adult woman with some seriously badass self-defense skills. He wasn’t going to hurt any of us; he would be a bloody pulp before he came within three feet of my mother.

I took a defensive stance and amped up my energy, expanding where I had previously shrunk. For the first time in my life, I got ready to fight.

Meanwhile, something had shifted in my sister, and she was no longer a frozen child, praying the predator would pass us by. She declared that we were leaving immediately, and got us out of there.

We spent the rest of the evening processing that experience over the very best tiramisu I have ever had.  At the time we were all shaken but I had glimmerings of joy coming through too. 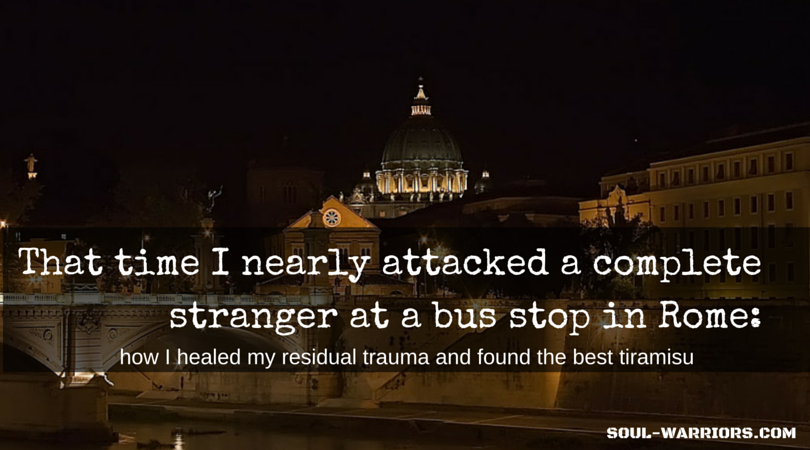 Years ago, I had read Peter Levine’s Waking the Tiger: Healing Trauma, where he discusses what happens when we cannot fight or flight in response to an overwhelming threat – instead we freeze.  I even wrote about this a few years back:

Trauma is stored in our physical body; it is a physiological response, and for the majority of us, the ‘completion’ of our response is interrupted by our rational thinking.  That leaves us in a perpetual state of fear and anxiety, and sadly often draws us to events and situations where we may have the opportunity to resolve the trauma – though often we simply end up re-traumatized.” (Read the whole thing here.)

I think my remaining sliver of fear and anxiety paired up with my sister’s to bring us this opportunity to resolve the trauma. And we did – both my sister and I got out of ‘freeze’ and let the energy flow through us into both fight and flight. The three of us got to process the experience and heal some very old family wounds.

I now consider that world’s-best tiramisu in an otherwise blah restaurant a little celebratory wink from the Divine. Before that night, I always felt like there was some lost girl inside of me that I couldn’t help, even though I tried so desperately. In the weeks after the experience, I gradually noticed that I felt whole and complete. Very few things feel better than that. 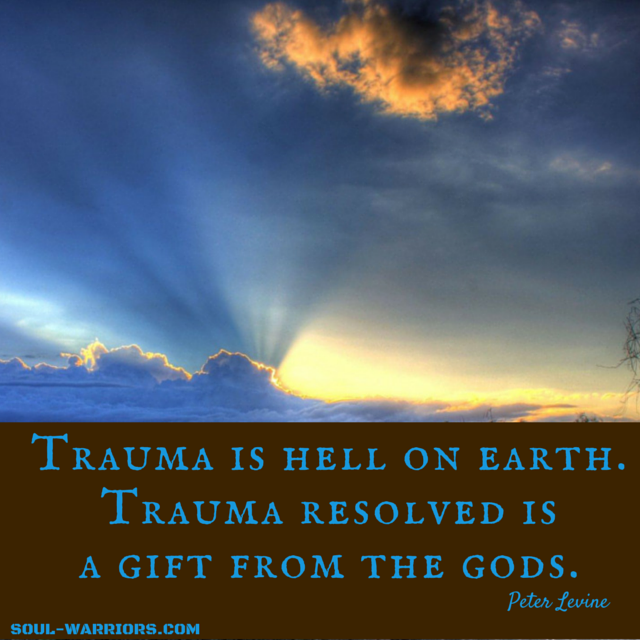 So what does this mean for you? Whenever I can, I like to give you step-by-step processes to help solve problems, but the problem of residual trauma is too complex for that. I could never have predicted the resolution of mine.

What I can offer is this:

Do everything in your power to resolve whatever trauma you have. Even if it seems hopeless, like you will never fully recover, I promise that you can – just keep moving towards it.

Gather the tools and experiences you need so that when life presents you with an opportunity to resolve the trauma, you can kick its ass.

Then maybe celebrate with a delicious dessert.

Peter Levine said, “Trauma is hell on earth. Trauma resolved is a gift from the gods.” He’s right. And you’re worth it – no matter how long or hard the journey to whole and complete is, you’re worth it. Keep going.