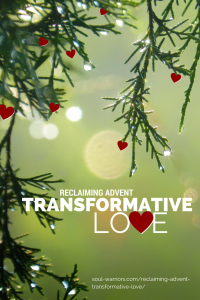 Last week I was determined to come up with some profound answers to the questions on hope and expectation, and share them with you today. It didn’t happen. My own week of living in the questions was beautiful, and I finally realized that nothing I can say would be any more interesting than whatever experiences you had this week of living in hope. One thing I will say is that I lived this week much lighter than I usually would. There is something about focusing on hope that makes everything shinier than normal and that is something I will be taking with me from this journey.

What is on my heart this week perfectly coincides with the week two of advent – love.  It seems to me that when Spirit is determined to change something in my life, love always plays a major part. To quote from Lemony Snicket, “Love can change a person the way a parent can change a baby- awkwardly, and often with a great deal of mess.”  Yes! Yes, that is exactly how it has felt. I think it’s the way of Spirit to transform in this manner. It’s not pretty. It’s often excruciating in its awkwardness. It’s messy. Half the time, it hurts like hell when it is happening.  It’s only when I’m through it that I see the breathtaking, awe-filled beauty of it.

A while back, I asked you in this post to consider the idea that there is a great force of Love, just waiting for you to give it any opening to help you in any way you allow. Today, I’d like you to consider the possibility that YOU are that force of Love, and that Spirit/Love is using your life to touch others in ways you cannot even imagine.  I believe it’s impossible for us to truly know how we are affecting other people – unlike It’s a Wonderful Life, we don’t all get access to our personal versions of Clarence. I can’t see it for myself, but I can see it in how others have loved and changed me, and that’s what I’d like to talk about today.

Last week I shared with you that I had fallen in love with an incredible man, who I am going to call Rick. It’s not his name. Though I would be delighted to take out billboards on how amazing he is using his real name, he’s one of the most private people I’ve ever known, and he would kill me.  Rick was able to have such a profound effect on me because he loves me, and I know it. I wanted this to be romantic love, and created a host of drama in trying to make that happen.  It didn’t work, of course – he’s in love with me or he’s not, and no amount of strategizing on my part is going to change that.  But that’s hardly even the point. The point is that his love – even in a form that was not my preference- changed me. It opened me up to trust. It opened me up to surrender.

After the whole Rick fiasco, I was heartbroken, weary of the next monumental-feeling healing journey in front of me, and deeply afraid that I had managed to injure Rick and damage our friendship with my drama storm. I had sent him the most open hearted and vulnerable letter I was capable of writing, and I felt completely raw. It was in this state that I embarked on a trip to Michigan to spend a week with six of my dearest friends, whom I met last year on a trip to Africa.  I consider these women to be the sisters of my soul, and I’ve been nothing short of stunned that, somehow, I have managed to become a part of this incredibly supportive, authentic group.

Nonetheless, I was afraid to go. I felt like a mess. I was afraid I would be judged (even by these most accepting women) for falling for Rick in the first place, for how badly I had handled the entire situation with him, and I felt ashamed to be facing a whole twelve step journey. I was also afraid to share with them one of my revelations from the Rick fall out – after yet again falling for a man who had no interest in being in relationship with me, I took a hard look at myself and what draws me to these types of men repeatedly. I realized that I am afraid of sex, and falling for men who keep me at arm’s length is a great way to avoid looking at this issue.

So it was with great fear that I headed out for Michigan, and I could barely even participate in the fun catch up chatter as we made our way to the lake house where we would spend the week.  I knew if I didn’t share my story on the first day, I never would. So I laid everything out for them – the heartbreak, the shame, the fear, the hope of Rick, CoDA, and the impending spiritual surrender. I spoke about growing up with a sadistic, mentally ill father, and my long suspicion of having been sexually abused by him. I told them I have few memories, but rather a general sense of ick and shame, and my theory that my abuse may not have been a physical event, but rather living with a man who had creepy, predatory sexual energy towards me.  It was terrifying to do, but I was so sick of repeating the same pattern over and over again with men that I was willing to just put everything out there. I wanted to let Spirit know I sought healing, and I’d do whatever I had to in order to reach it.

Spirit showed up in all types of bizarre ways during this trip – men leaping over fences to tell me that healing can be quick and fairly painless, finding myself lost (on a tiny peninsula) in the woods with multiple totem animals coming to meet me, unexpectedly having dinner in a remodeled insane asylum, videos of channeled entities saying that we can change our patterns at any time via the use of a permission slip, Archangel Michael sending me another invitation to let him help me. (No kidding. Last year, I scoffed at this. This year, I just surrendered and said, “fine! I get it already!”)

Spirit showed up most clearly, though, in the form of six beautiful human beings who saw me, saw everything that I was ashamed of, and loved me anyway. Spirit saw to it that I showed up battered and raw enough that I could finally open up and let all of that love in. Spirit ensured that my shaman friend had stepped into her own power just in time to show up for me and lead a healing ritual that cleared old, lingering blocked energy out of my second chakra. These women healed me, in more ways than one.

Coming from the background I did, I never saw this much love and safety as even a possibility for me. It was a dream that I could have never dreamed, because it was so far out of my experience. Spirit could see it for me, though, and the only thing ever required of me was to show up, with as much vulnerability and openness as I was able, and be willing to receive.

To each member of my soul sister family, thank you. As a writer, it kills me to not be able to put my love and gratitude for you into words.  To borrow a phrase from Chip Brown, I feel that I am bludgeoning the ineffable when I even try. To have the love I feel for you returned with such healing beauty is the gift of a lifetime. And a huge thank you to Rick, even though he will likely never read it. I cannot look into your eyes without seeing the incarnate divine staring back at me. Thank you for sending me on this journey.

For this love week of Advent, I’m inviting you to journey on with me by trying to catch Love in action in your own life.  It’s been said that there are only two motivating factors in the world – love and fear. I’m not sure I buy that in the minor details of life, but I do when it comes to the major decisions. Which energy will you feed in your own life this week?

What if I lived as if I was hugely influential, able to make an impact on others’ lives through even small decisions I make? How would I act differently?

How can I be a source of Love in the world in my daily life?

How has the love of others transformed me? Have I ever shared with them how much they changed me?

How has my love for others transformed me?

Is there some are of my life where I am closed up like a clam, afraid to let love in? Is there any tiny step I can take to create safety and trust in this area?

If I allow the love of Spirit into my life, what old ideas of myself will I be willing to give up?

“I was dead, then alive.
Weeping, then laughing.

The power of love came into me,
and I became fierce like a lion,
then tender like the evening star.”
― Rumi

“Being deeply loved by someone gives you strength, while loving someone deeply gives you courage.”
― Lao Tzu

“It takes courage to love, but pain through love is the purifying fire which those who love generously know. We all know people who are so much afraid of pain that they shut themselves up like clams in a shell and, giving out nothing, receive nothing and therefore shrink until life is a mere living death.”
― Eleanor Roosevelt

“What is hell? I maintain that it is the suffering of being unable to love.”
― Fyodor Dostoyevsky

“If a thing loves, it is infinite.”
― William Blake