In case you’re somehow not aware, a zombie is “a dead person who is able to move because of magic according to some religions and in stories, movies, etc.” according to Merriam-Webster Online.  I’ve never quite understood the appeal – they seem to be the dullest supernatural menace imaginable.

Granted, zombie movies have gotten a lot scarier and more compelling; gone are the days when they just shuffled along, and even I could outrun them. (Shaun of the Dead and Zombieland played this so well.)

There’s a part of me that thinks that as a culture, we’re actually expressing a very deep fear with our zombie obsession. We’re afraid of becoming soulless bodies, animated but disconnected from spirit.

Though near Halloween, I wasn’t expecting to write about zombies this week. I was scheduled to discuss Malidoma Patrice Some’s amazing book, Ritual: Healing, Power and Community. To my great shock, Some’s book supports my zombie theory and takes it way deeper than I ever could have.

(I highly recommend this book, though it is not one that can be read or discussed with ease – it’s challenging on multiple levels, and I could easily create several months’ worth of posts on the different threads.) 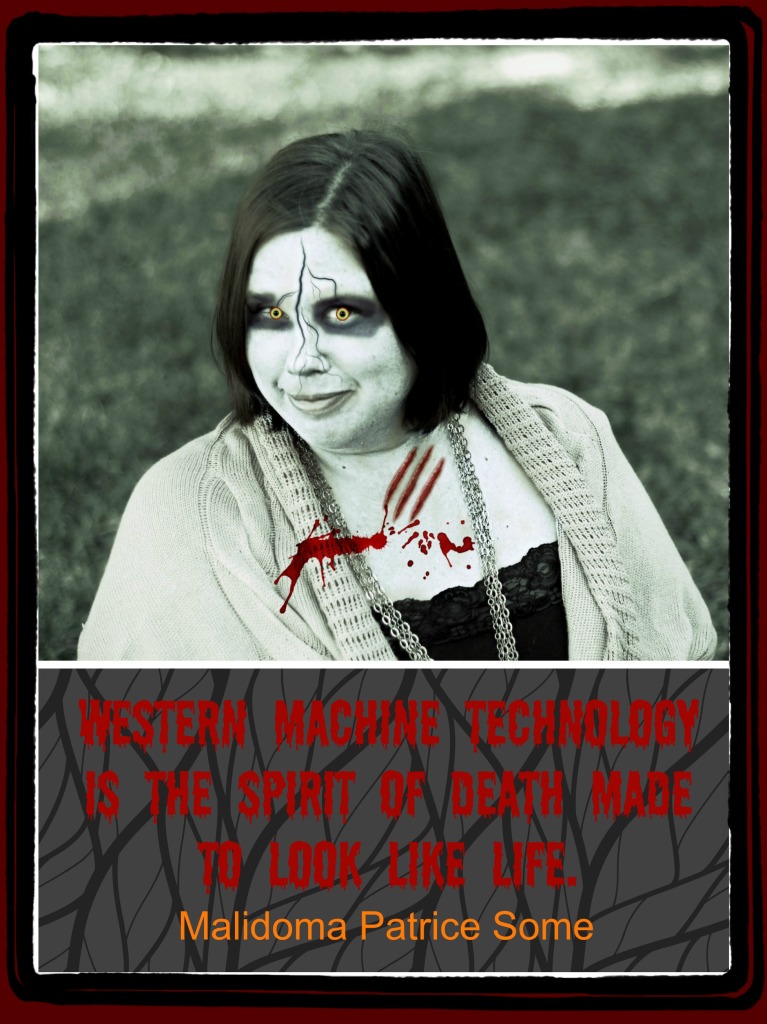 Some is an initiated shaman in the West African Dagara tribe, and a doctor two times over with degrees from Sorbonne and Brandeis University. This is a man who truly does walk between two worlds – the indigenous and the modern – and does so with a great deal of wisdom. Here are just a few quotes from his book to get you thinking:

“The abandonment of ritual can be devastating. From the spiritual viewpoint, ritual is inevitable and necessary if one is to live…Where ritual is absent, the young ones are restless or violent, there are no real elders, and the grown-ups are bewildered. The future is dim.”

“Among the Dagara, the absence of ‘time’ generates a mode of life whose focus is on the state of one’s spirit. This is not comparable to what machine-dominated culture is all about. While in America, the newcomer thinks at first that people move hurriedly in order to enjoy the thrill of speed. But a more traditional look a motion, at speed, quickly reveals that speed is not necessarily so much a movement toward something as it is a movement away from something…And so the elder sees those in constant motion (going places, doing things, making noise) as moving away from something that they do not want to look at or moving away from something that others do not want them to look at.”

Thus the two worlds of the traditional and the industrial are diametrically opposed. The indigenous world, in trying to emulate Nature, espouses a walk with life, a slow, quiet day-to-day kind of existence. The modern world, on the other hand, steams through life like a locomotive, controlled by a certain sense of careless waste and destruction. Such life eats at the psyche and moves its victims faster and faster along, as they are progressively emptied out of their spiritual and psychic fuel. It is here, consequently, where one’s spirit is in crisis, that speed is the yardstick by which the crisis itself is expressed.”

If you are anything like me, reading this might put you into overwhelm. I don’t know how to solve a problem this big. I don’t want to live without machines (seriously!!!) – and unlike many of my friends, I have zero desire to even visit a traditional African village, let alone live in one. (Born and raised in giant cities, I find towns with populations under 100,000 a little intimidating.)

I don’t have an answer for the whole problem – but I do have ideas for how we can change our own lives, a little bit at a time, to (hopefully) find a blend of both the traditional and modern worlds. Try one out this week:

What are your ideas to avoid a zombified future? Leave a comment and share them with us.