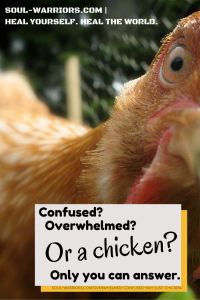 Do you ever have those ‘come-to-Jesus’ moments with yourself, when you realize things just have to change?

I had one last Sunday – after months of working the equivalent of three 25hr/wk jobs, I realized I simply could not continue to live with this schedule. Something had to give.

When I initially planned this out, it was intended to be closer to three 20hr/wk jobs, which I could do for six months without complaint. Two of those jobs are contract work for teams of people I am committed to helping, and the final one is my own coaching practice.

Long story short – the two contract jobs suddenly needed a lot more time, and were fighting a little bit over who got how much of my time. Meanwhile, my mind was simply bursting with plans for new, expanded content, bonuses I want to give, new programs I want to develop. My heart longed to be spending more time on this. As it was, I could barely handle writing every week and keeping up with my existing clients.

Exhausted and overwhelmed, I decided last week that enough was enough – I was going to prioritize pleasure and self-care over work, even if it meant I had to put my plans for expanding my coaching practice on hold. Though this is the work I most love and want to grow, I had given my word on the other two commitments and would not break that.

Wouldn’t you know it – four days later, I received a call saying I’d be eased out of one of the contract jobs, with the explanation that they knew they’d been pulling more hours than agreed and would keep me on reserve status to free me up for the other contract work. They were grateful and happy with the work I had done, and would keep me in mind for future crunch periods where they were short-staffed.

I was so pissed off!

It took about 24 hours for sanity to kick in and gratitude to flood me; 24 hours spent whining, feeling victimized, and panicked about money. How dare one contract job try to pull me from the other without my consent? Who did they think they were to interfere with my work? What was I going to do about my awesome debt-payoff-acceleration plan that would now return to a slow creep?

When I allowed all of this crap to process through, I was left with several realizations:

Clarity – it’s something most of us claim to want, and so often avoid actually seeking. After this week, I think I finally understand why. 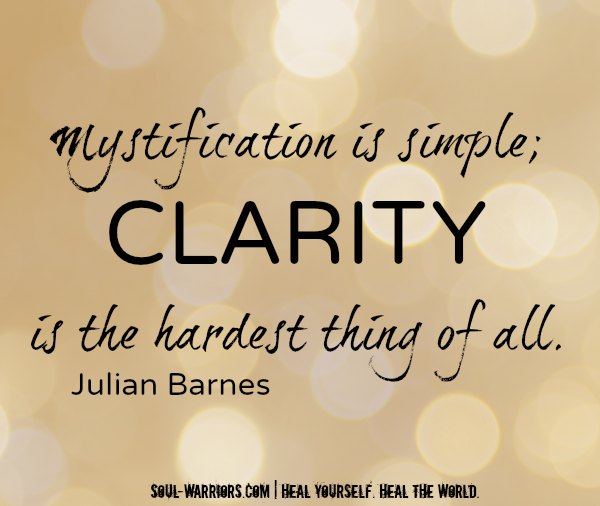 The Universe loves clarity, and responds to it swiftly – and that scares the hell out of us.

Clarity is scary because most of us are more than a little afraid of the things we really want.
Decide the key qualities you truly need in a partner, and he or she might just show up, causing you to confront your lifelong fear of intimacy. Decide you are committing to expanding your business, and receive an invite to speak in front of a crowd, causing you to confront your fears of public speaking.

Clarity is scary because it inspires risk and action.
Confusion and overwhelm is actually pretty easy. Not pleasant, but easy. There’s no risk involved when you are confused and overwhelmed.  There’s no need to ask your boss for those two weeks off during your busiest season if you can’t yet decide if you want to commit to a meditation retreat.

Clarity is scary because it means commitment and loss of possibility.
We have a limited amount of time, and when we get clear and commit to one thing, we’re effectively saying no to others. If I commit to spending my time growing my heart-centered coaching practice, I’m saying no to easy money doing heady contract work. It also means I’m committing to making my soul work pay my bills soon, not someday.

Ready to face those potential fear and find some clarity yourself? Here’s my invitation for the week: pick an area where you feel confused, overwhelmed or are resisting looking at your feelings too closely. Then try asking yourself this: what do I almost know that this confusion/overwhelm/resistance is covering?

If you want lots of clarity (and are willing to risk any resulting quick Universe effects), share your answer below.

I’m announcing one of those awesome bonuses I will soon have time to deliver next week to my email subscribers. If you are not signed up, this is the time! Just fill out the box below: