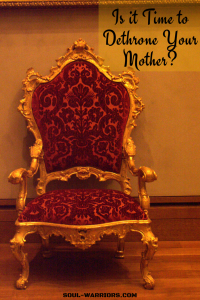 Something has been happening to me over the last month or so, sparked by my own writing about appreciating who you are. (As is so often the case, I’m drawn to write about what I most need to learn in the moment.) I’ve come to this revelation:

My “standard of excellence,” the bar by which I judge myself, is based almost entirely on my mother.

Now, this is a seriously kick-ass standard of excellence; my mom is amazing in ways too numerous to write in a blog post. She’s done more in her late 70’s than many people have done in a lifetime, including writing, directing and starring in plays, writing a novel, moving to Rome for part of a season, and doing intensive personal growth and healing work. Everyone in her community knows and loves her; if she’s not entertaining or organizing events, she’s driving someone to the hospital, lending a listening ear, or taking care of someone’s cats.

She’s a paragon; “if I could name a single person for saint hood, it would Sally Connors,” says even her web designer. (You can read more about her at Sallyconnors.com or in my Warrior Profile of her.)

It is the greatest gift of my life to love and be loved in return by this amazing woman.

In my mind, I couldn’t do better than to be like her. The only problem is that, at a fundamental level, I’m almost her exact opposite. She and I had a lengthy discussion about our Myers-Briggs types after my post about it last month; she is an ESFJ (“The Provider”) and I am an INFP (“the Healer”), and we are very different in what drives us. Here, from the awesome site Truity, are the basics of what makes each of us tick:

“What Makes the ESFJ Tick
ESFJs act according to a strict moral code, and look for others to do the same. They often see things in terms of black and white, right and wrong, and they are typically not shy about sharing their evaluations of others’ behavior. ESFJs seek harmony and cooperation, and feel this is best accomplished when everyone follows the same set of rules. They have a sense of order in the way people relate to one another, and often take on roles that allow them to help enforce that social order.

ESFJs feel a sense of personal responsibility for other people’s needs, and are usually eager to get involved and help out. They tend to be serious and practical, dutifully putting business before pleasure—especially the business of caring for others. They typically enjoy routine and often keep a regular schedule that allows them to be organized and productive.”
(http://www.truity.com/personality-type/ESFJ)

”What Makes the INFP Tick
INFPs value authenticity and want to be original and individual in what they do. They are often concerned with a search for meaning and truth within themselves. Following tradition holds little appeal for the INFP; they prefer to do their own exploration of values and ideas, and decide for themselves what seems right. INFPs are often offbeat and unconventional, but they feel no desire to conform. The INFP would rather be true to themselves than try to fit in with the crowd.

INFPs are accepting and nonjudgmental in their treatment of others, believing that each person must follow their own path. They are flexible and accommodating, and can often see many points of view. It is important to the INFP to support other people; however, the INFP may react strongly if they feel their own values are being violated. They especially hate being steamrolled by people who insist there is one right way to do things. INFPs want an open, supportive exchange of ideas.”
(http://www.truity.com/personality-type/INFP)

I’m sure it will come as no shock to you that my mom and I have struggled in relating to each other over the years, and neither of us were surprised to see we were so different. Working with these differences and understanding the other’s point of view has often been challenging, but we have put in the time and effort to understand one another and have grown all the closer because of it.

Despite seeing this so clearly, I didn’t get a lightbulb moment until a couple of weeks later, when I realized I had an adopted love language that wasn’t really mine. Seeing so many people benefit from my mom’s acts of service over the decades made me think it was the highest form of expression of love. It was a bit of shock to realize it isn’t for me.

Is it time to dethrone my mother?

No, of course not – she totally rates (and honestly, earned) the pedestal I have her on, and there she will remain, for me and for all who know her.

What’s funny to me is realizing that the people around me already hold me to my standard, not my mother’s. No one asks me to organize events or routinely drive them to a hospital. The few close friends who call me when they need an “act of service” type favor do so with reluctance and apology.

People call me when they need my gifts – when they need someone to listen to them, to offer a new view, to help untangle a web of false self-loathing, to see an alternate future for them.

Which brings me (finally!) to my point today – I don’t recognize my gifts because they are as much a part of me as drawing breath. Living in my gifts is the very definition of ease – the thing that you actually can’t not do is the gift you bring to the world.

The best contribution you can make is cultivating your own gifts and giving them with joy.

The world needs each of our gifts; if you are forever striving to be someone else, you’re not giving the very best of yourself, what the world needs the most from you.

So, today I invite you to dethrone your heroes – not from their rightful pedestals, but from your model of the best way for you to be in the world.

Begin creating a model that highlights your natural gifts, talents, traits, and strengths.

I’ll leave you with these questions to ponder: