Do you have a situation like this at work: a blaming, angry, screaming boss, a hardworking, helpless, hopeless employee, and a series of people stepping in to vilify the boss and/or commiserate with the hopeless employee?

You might have it instead in your family feuds over whether your son should learn to skateboard, or an incredibly light version of it on Facebook, seeing a mean comment and rushing in to defend the original poster.

If so, you, like so many of us, have stepped into the Drama Triangle. 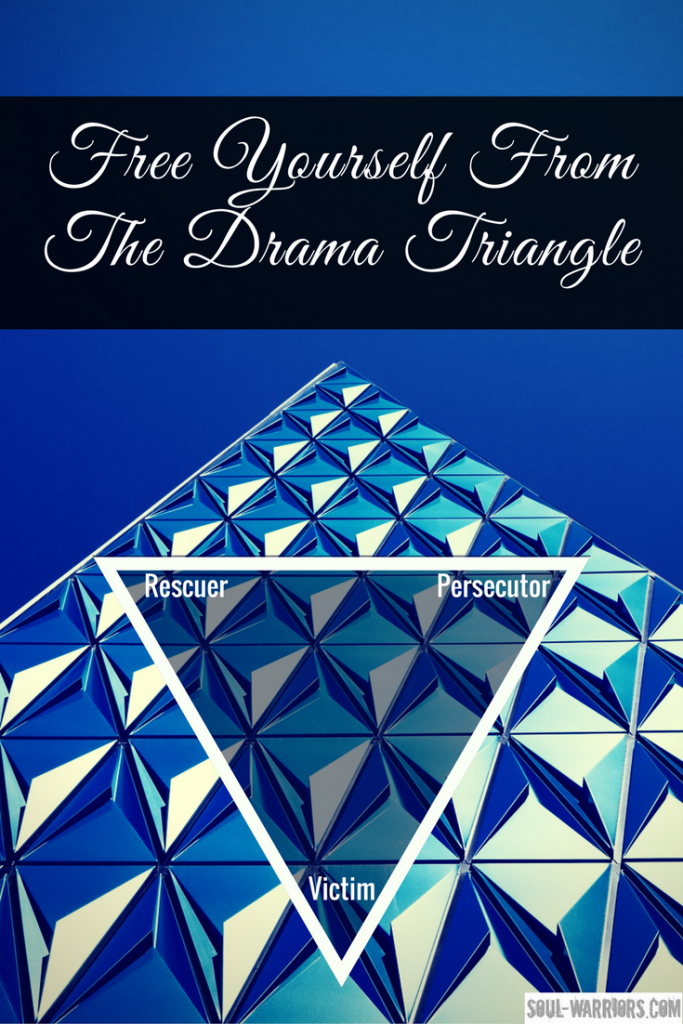 The Drama Triangle, originally theorized by Stephen Karpman, is a system of interaction between people in these three roles:

The Persecutor: this role is blaming, critical, controlling, angry, and superior. Think, “you MUST pay the rent!” (Though, honestly, it’s hard to see why she shouldn’t have to pay the rent. Apparently in this classic melodrama, the landlord is an evil villain with nefarious motives.)

The Victim: this role is helpless, hopeless, and unable to make a decision or take responsibility to change his or her life. Think, “but I can’t pay the rent!”

The Rescuer: this role steps in to “save” the victim, “helping” by confronting the Persecutor or offering disempowering emotional support to the victim. Think, “I’ll pay the rent!”

If you want to know more about this concept, I highly recommend this article by Lynne Forrest, a longtime student of the triangle with her own take on it. (She calls it the Victim Triangle, as each position is truly a victim.)

I grew up in this triangle, and much of my recovery work was getting out of this pattern of interaction.

That doesn’t stop me from hopping back in when my friend is treated unfairly, or someone’s mistake causes me to have to do a ton or rework, or when I spew out vile mental insults at people driving slightly slower than me. 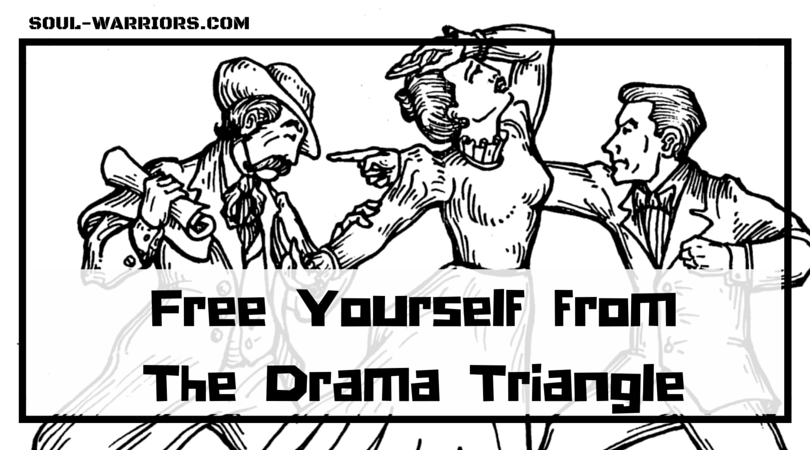 These days it’s a lot easier to see it and get out of it. Here’s my quick method of figuring out which role I’m playing:

The starting point for me is either noticing I feel like crap or am feeling overly invested in a situation that has nothing to do with me. (My “starting gate” as Lynne Forrest would say, is that of a rescuer. When I start feeling compelled to “defend” a grown adult from another, I know I’m back in the triangle!)

Once I’ve identified that I’m feeling like crap, I ask myself these three questions until I get a yes on one:

Am I blaming someone? (Like I do when I’m sending out angry energy at fellow drivers!)
Am I feeling helpless? (Like when I’m moaning about missing a deadline because of someone’s mistake.)
Am I trying to save someone? (Like when I want to interfere in my friend’s process and “help” her.)

Often that is enough. Once you’re aware of the triangle and know that it’s a source of endless suffering, it’s often easy to step out of it the moment you recognize it.

If it is not enough, there are some follow on questions you can ask for each role to switch the energy.

Persecutor Role (Am I blaming someone?)
How can I take responsibility for my experience?

Victim Role (Am I feeling helpless?)
What action can I take to create my experience?

Rescuer Role (Am I trying to save someone?)
How can I help empower this person?
What do I need right now? 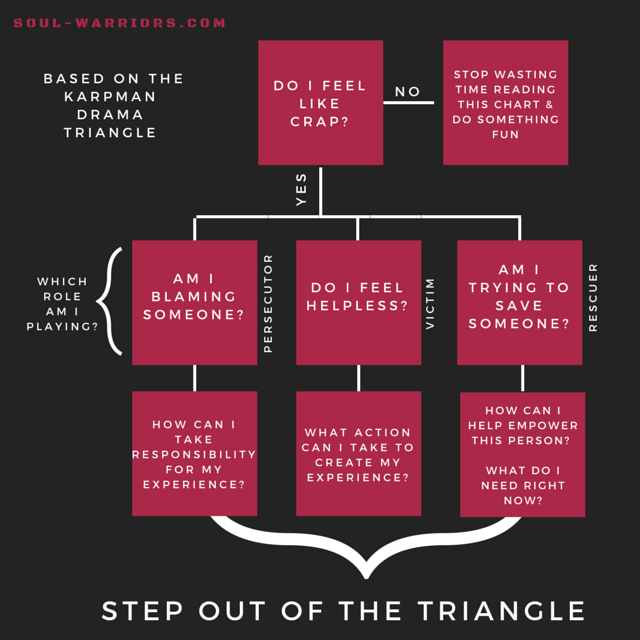 If these questions are not enough to get you out of the role, it might be worth learning more about the triangle and it’s alternatives.

David Emerald has offered an alternative to the drama triangle with The Empowered Dynamic (TED), which outlines an empowered version of each of the roles. According to the Power of Ted site, the roles are as follows:

Creator (Drama version: Victim) — “focused on a desired outcome, propelling the person to take Baby Steps toward what they want to create.  A Creator also owns their ability to choose their response to life circumstances.”

Challenger (Drama version: Persecutor) — “focused on learning and growth, holding a Creator accountable while encouraging learning, action, and next steps. A Challenger consciously builds others up, as a positive alternative to putting someone down by criticizing, blaming, or controlling.”

Coach (Drama version: Rescuer) —“uses compassion and questions to help a Creator develop a vision and action plan. A Coach provides encouragement and support, in place of “rescuing” actions.”

If you have done recovery work, you likely are already excellent at spotting the intense drama triangles and getting out of them. I find that it’s now the small everyday drama triangles I leap into (“he said WHAT? How dare he?”) My awareness of them – along with my ability to get out of them – is growing.

What’s the most recent role you’ve played in the drama triangle? Leave a comment and share it with us.