Last week I posted about the idea of “everyone” and invited you to really look at if you were handing over your power and your sense of self to a worthy group of people. Huge breakthroughs can come from just recognizing that the people who make up your “everyone” are folks who you wouldn’t really trust to watch your cat. Sometimes our old, ugly, negative belief patterns are so deeply worn into our brains that it takes quite a bit more than that. This post is all about taking those negative self-concepts and slowly, painstakingly going about replacing them. It’s a tough road that involves a lot of work, but it is well worth the effort.

In her book, Finding Your Own North Star, Martha Beck recommends these strategies for replacing your hostile “everyone” with a kinder, more accurate version:

(Paraphrased from the chapter “Getting Everybody on Your Side”, Finding Your Own North Star by Martha Beck, New York, NY, Three Rivers Press, 2001, Pages 91-103.)

I’d like to show you what this has looked like in my own life, using the most hideously painful example statement that I didn’t believe:  “I’m physically beautiful, and I always will be.” If you’re familiar with my blog, you already know that I’m STILL cleaning up some crap about this statement, and I’ve been working on it now for about fifteen years.

I’ve already detailed way too much of how I came to believe that I wasn’t physically beautiful or would ever be to my various therapists, so I’m giving you only the outline here. Starting with, I have been overweight since I was a child and I …

1. had a crazy father who was obsessed with weight, hated all fat people, and told me frequently how revolting I was for being fat and how I would never find a man to love me.
2. had the standard, traumatic “gross fat kid” grammar school experience.
3. lived in a culture where it’s astoundingly easy to believe that ‘everyone’ agrees that no fat person could ever be considered beautiful.
4. had multiple experiences of random people shouting from cars/stopping me on the street to tell me how fat and revolting I was.
5. had been informed by the boy whom I loved and seemed to deeply love me that if only I looked more like Claudia Schiffer, he could have been attracted to me.

By the time I was twenty years old, I was dead convinced that everyone – everyone – agreed that I was not physically beautiful. I could back that up with an incredible amount of evidence, and, therefore, it had to be true.

This was way before any self-help or therapy for me, and the person who set me on the path of cleaning up this particular bit of ‘everyone’ nastiness was my sister. (Thank you, THANK YOU, Cheryl!) She had always been beautiful, and always been thin, but she was also raised in my household and thought she was neither. She recommended a book called “Self Esteem Comes in All Sizes” by Carol A. Johnson, and suggested to me that I didn’t need to hate myself or my body, something that felt revolutionary and foreign at the time.  The more-than-a-decade journey to actually believing and living that involved all of this:

Keep a list of all positive feedback you’ve had on the topic and read it often.
This one is just purely fun, and incredibly powerful. I eventually decided to keep a journal solely dedicated to positive feedback, and when I feel like crap, I can pull it out and it’s an instant mood lifter. If you don’t yet have positive feedback on your particular topic – which can seem very scarce in the beginning – it can also help to find books, websites, etc. that are uplifting and can return you to a place of positivity when you need it.

Display only pictures and mementos of people who support your true self.
It’s come to the point where I’ve finally found some empathy and compassion for my father, who was battling his own demons throughout his life…but I still don’t have any pictures of him up, and I think it’s unlikely that I will any time soon.  People who are very critical of you are likely already taking up way too much of your emotional space; there’s just no reason to give them your physical and energetic space as well.

Rewrite your story from the standpoint of being the hero instead of the victim.
I recently wrote a whole post on this, so I’m not going into too much detail here, but in my mind this is one of the most powerful things you can do to clean up any negative ‘everyone’ beliefs. I changed my story of struggling with an eating disorder from “I am a fat, out of control, loser” to “Some part of me KNEW I was believing lies about myself and needed to do a ton of emotional work, and made sure I heard her, no matter what.”

Read/watch/listen only to media that supports your authentic self.
This was a major one for me –at the time I was reading various fashion magazines, comparing myself to the models in them, and feeling hideous. I stopped. In fact, I pretty much stopped reading anything that made me feel negative, icky, fearful or bad in some way – including the news. I started seeking out magazines, movies, music and experiences that celebrated beauty in all sizes and reinforced the idea that all people are beautiful.  This is something I still practice religiously today – I made the mistake of reading some horrific online men’s magazine article on “women to avoid at bars” recently, and had to go back and do a bunch of thought work over a course of days! I’ve found that what I let into my energetic space is incredibly important, and it’s vital for me to avoid negative and icky media altogether.

Talk to trustworthy, authentic, clear people about your negative ‘everyone’ beliefs.
If you have a group of clear and trustworthy friends, it can be an amazing experience to discuss exactly why you don’t believe you’re a winner, or why you’re ugly, or why you’re worthless. Having friends who can act as a clear mirror for you, reflecting back your inner worthiness, is priceless. If you don’t have that at the moment, there is nothing wrong with renting some until you do. Hiring a therapist, a coach, a spiritual director – anyone who recognizes the inherent worth of every human being – to work through the lies you’ve been believing is a beautiful and healing thing.  Also worth mentioning is hiring people who are experts in the area you are struggling with who support authentic expression. For example, a couple of years ago I hired a stylist who is amazing, who firmly believes that each person is beautiful and that the key to beauty is honoring your own authenticity.  It was an incredible experience to work with someone who could see me more clearly than I could, who was determined to bring out my own beauty instead of trying to make me look more like everyone else.

Spend as much time as possible with people who support your true self, and avoid those that don’t.
Today, the very thought of having friends who would actually tell me I am ugly, fat, or revolting in some way is downright laughable. As if I would spend any energy on someone like that! But that was certainly NOT true in the beginning, and I had a lot of work to do. I started by asking the people who were telling me I was ugly in some way to stop, and asked that no one discuss weight with me in any negative way. It was met with some resistance, but as a whole, everyone agreed and this was a tremendous relief.  I eventually cut off my relationship with the one person who would not stop, though it was for more critical reasons even than this. As time went on, I was drawn more and more to people who supported me and loved me – no matter what I weighed.

Each of these steps is fairly small, but they can have a tremendous cumulative impact if you choose to take the time and energy to do them.  I had an “aha!” moment earlier this year, reading through Bill Phillip’s book, Body for Life, searching for what might be considered “fuel food” – a fairly foreign concept to someone who has spent a lifetime bingeing and dieting. I was looking through the Before/After profiles section…and realized I found every single person more attractive in their before photos! This is not to say I was not phenomenally impressed with their accomplishments and their dedication to transforming their health and well-being, ’cause I seriously was.  It just made me realize how much work I’ve done on letting go of the idea that thinner is always more beautiful.

I’m leaving you with an invitation this week – go back to last week’s post and see which of those statements you don’t believe about yourself.  Pick the most painful one, and see if you can’t find any tiny step you can take this week to start transforming that belief. It’s so, so worth it!

Me at twenty, hating myself, with people walking up to me on the street and telling me I was fat and ugly. Though my body is so much closer to our cultural “ideal” here, I got so much negative feedback it was unreal. (Surprisingly, not about the Joker-esque lipstick.)

Me at thirty five, at least 75 pounds heavier, with people telling me I’m beautiful frequently. It’s AMAZING how much power our minds have!! 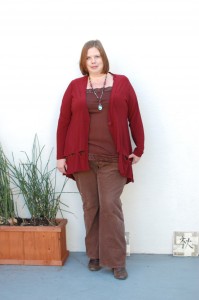