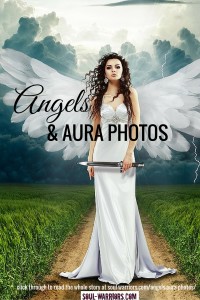 “See the deep blue, here, in your spiritual level? This is a sign that you have strong spirit guides, and that Archangel Michael is present in your aura. It would be good to work with his energy,” said the woman interpreting my freshly-taken aura photograph. Dreamy new-age music flowed into the pastel room, and I got a flash of memory of the creepily cherubic, Aryan-nation visage of Archangel Michael tacked up in the entrance. I clamped my jaws, with valiant effort, to prevent my teenage niece’s pronunciation of “whatever” from passing my lips, and managed a noncommittal “mmmm”.

Now, I am someone who believes in this type of thing – energy, auras, the world of Spirit – someone, in fact, who would actually pay $35 for an aura photograph.  I have a deep love of God/All-That-Is/The Divine/Whatever-You-Want-To-Call-That-Amazing-Spiritual-Being, and even in the darkest times of my life, have never doubted His(Her/Its) existence, because I can feel it. Religious doubts I get 100%, but doubting that there is some benevolent spiritual force feels to me like doubting sunshine, and I just can’t understand it.

Angels, however, are a completely different story. At best, I find the whole concept a fanciful tale, told to children, with a similar level of truth and loveliness as Santa Claus. Thinking about them actually existing and lurking in my aura brings me instantly to “Ew! Get the fuck away from me, freakish ectoplasmic voyeurs!”

I don’t care if they are benevolent, beautiful messengers of God, I do NOT want disembodied beings hovering around me, and there probably isn’t a single thing the aura reader could have said that would make me want to bolt out of there faster. I escaped as soon as possible, smoking furiously in the parking lot, waiting to screech “that was such bullshit!” to my friends as they came out.

The thing is, though, I was in Sedona, AZ with two of the most magical people I’ve ever known, people who can read energy and emotion and feel vibrations from crystals, people who I also know to be completely sane, competent, loving, and grounded, who can hold jobs and raise children and maintain profoundly authentic relationships.  People who swear and wear jeans and listen to music not dominated by flutes and sitars.

And one of them – whose aura photograph basically looked like the sun in supernova – told me (very nicely) that I was resisting hearing something I needed to hear, that the interpretation was dead on, and that I needed to get past the whole archangel deal and just realize that was the language the aura reader knew, but the fact was that I was clearly very deeply spiritually protected, and it might do me some good to acknowledge that.

Hmmm. Internally I decided I couldn’t discount her – the woman has way too much to teach me about living an authentic, loving life for me to discount anything she says – and I tried to settle in to the possibility of being spiritually protected, while resisting the urge to break out a giant can of Raid and spray the entire area surrounding me, JUST IN CASE. 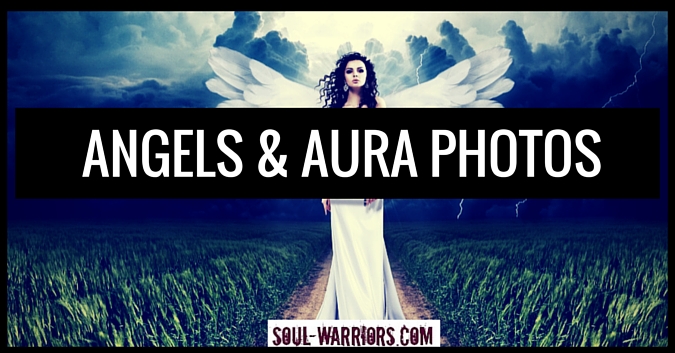 It wasn’t until days later, driving out of Phoenix from another socially-lethal-but-strangely-soul-nourishing visit in one of the oddest friendships of my lifetime, that the profound truth of my ‘spiritual protection’ hit me with the intensity of lightning. I had to pull off the road for a bit just to wrap my mind around it. I’m still having a hard time putting it into words, but here is my best shot.

By the time I was 18 and fled to California, I was fairly broken, having been raised by a sociopath (sorry, Dad, but the sugarcoating days are over) and befriended (imprisoned! imprisoned!) by one of the scariest people I’ve ever met. And while my own personal form of ‘brokenness’ might be unique, I’m coming to the realization that we are all broken in some way, by something or someone, and really our only decision is to heal or to pretend we’re not broken.  The fantastic Glenn Phillips puts it better than I do; “Everybody’s been through their own hell; there’s nothing too special about getting hurt; getting over it, that takes the work.” (‘Duck & Cover’ off Winter Pays for Summer, if you’re interested)

The lightning flash of truth for me was the incredible, benevolent, beautiful process of healing that has been happening for me, even during the process of being broken – a loving mom and sister to balance the crazy dad – amazing friends to counter the one terrifying one – IS a form of spiritual protection.  Looking back, there has been a veritable flood of healers showing up for me, exactly when I need them, often with absolutely no idea of how much they are helping me just by their presence in my life. Days later, I’m still overflowing with gratitude for all of the amazing people who have touched my life. You all probably don’t even know who you are, but I can promise you that you’re deeply loved, at least by me, but I’m guessing by many, many more. If this is spiritual protection, than I can only say thank you from the depths of my soul, eerily hovering angelic beings included.

I guess my message for this post, if I have to have one, is this: you really can’t imagine the effect you’re having on other people, and without knowing it, you might be helping someone else heal just by being yourself.  Sometimes, like now, I think the world is more infinitely beautiful than we can imagine, and all we need to do is just open up and let it in.

I’m closing this with the chorus from the same Glen Phillips song, ’cause it feels right:

“Cause one way or another, we’ll all need each other
Nothing’s gonna turn out the way you thought it would
But friends and lovers, don’t you duck and cover
Cause everything comes out the way it should”

PS- I once received a gift of angels from one of those unintentional healers, and wanted to say it was deeply welcome. Receiving angels from a friend is a beautiful thing. Angels lurking around uninvited, in my own aura, is where things get creepy  😀