We’re looking at the Death & Rebirth square of the change cycle this week. This is one of my favorites, mainly because I have spent so much time either in this square, or hanging out in the Stagnant Pond trying to avoid this square. It’s messy, ugly, and often scary, and most of us do our best to avoid it whenever possible. If you find yourself hanging out in the Stagnant Pond, and you don’t even want to look at why, I’m going to bet you’re avoiding Square One. I have good news for you – it’s really not as bad as you think. Today we’re going to break down what Square One looks like and what you can expect when you’re facing it. 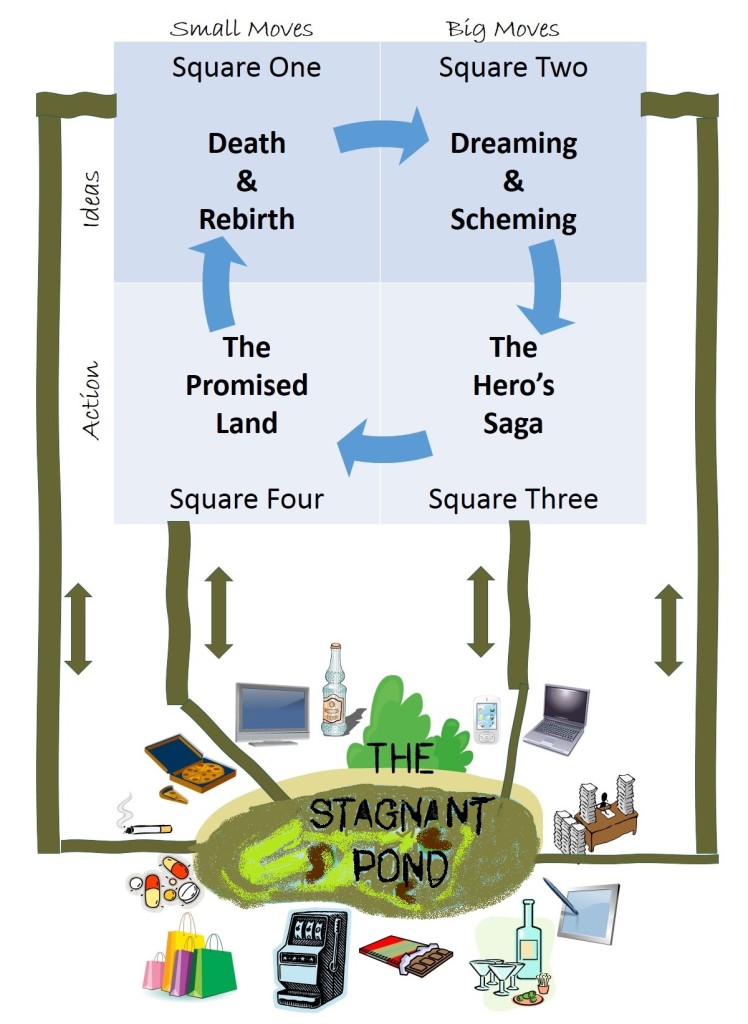 To review from prior weeks, the pretty blue portion above is Martha Beck’s Change Cycle. (For info on the pond, read this.) Martha’s model was designed to show the process of fairly dramatic life transitions, and she includes what she calls a catalytic event between Squares Four and One. It’s incredibly useful to know it when you are facing one of these major life changes, but I find it equally as helpful for the smaller changes, and that’s what I’m focusing on for this series of articles. I think sometimes smaller changes are harder for us, as it’s so easy to just head to the Stagnant Pond instead and pretend they are not happening.

I’m going to use a few examples for these next series of posts, one representing each of Martha’s catalytic events. The first is being offered a promotion at your existing company (an opportunity). The second is deciding to lose weight (a transition). The third is being rejected by someone when you believed there was a possibility of a serious romantic connection (a shock). None of these would qualify as a dramatic or radical life change, like getting married, divorced, having a child or moving to a foreign country. Nonetheless, each involves a change in identity, and will likely require moving through the whole change cycle.

So let’s look at what Square One will look like in each of these examples. There are three main components to this square – the death of your old identity, the (often very uncomfortable) liminal phase where you’ve died but not yet been reborn, and rebirth. In all honesty, none of them are much fun, and I believe this is why we sometimes stagnate instead of grow. This stuff can be really scary – especially when we’re unprepared for it – and it’s often just easier to not do it. To ignore it, to distract ourselves, to focus on other things – all of these seem easier than addressing the change.

The sad reality is that the change has still happened. No amount of alcohol, shopping, or YouTube videos can bring you back to Square Four. And it should be noted that though Square Four is called “the promised land” – sometimes it really isn’t. I think of it more as the result of your last change, which was an improvement over where you were before. However, I think labeling it ‘the promised land’ makes it seem like a blissful place that you don’t want to leave. Instead, I think it’s helpful to think of it as a state of inertia. It makes it easier – for me at least – to leave it.

Let’s take our internal promotion example first – Square Four in this case was you as a competent, reasonably happy manager in your company. Your ‘catalytic event’ was being offered the chance to be promoted to be a director in the same department. It seems like a good deal, so you accept. Then, your manager identity gets to die. This might look like this:

Then you get your liminal phase – where you’re no longer a manager, and yet not quite a director. It might look like this:

Finally, you get ‘reborn’ as a director:

We’ll do a less detailed version of the other two examples. For the person who decided to lose weight – the identity that ‘dies’ is the person who was comfortable at their current weight and happy with their eating and exercise habits. Death in this case might look like a lack of enjoyment of old habits, and a nagging desire for something new. The liminal phase might be a time when the old habits are not working or serving, but you have zero ideas for new habits and have no idea what to do. Rebirth might be a developing excitement about figuring out how to change eating and exercise patterns.

For our unlucky in love example – the ‘death’ here is of the person who dreamed of having this specific romantic relationship. The liminal period may be one of confusion and lament, and rebirth may be a simple acceptance that the dream has died and it’s time to dream a new dream.

I’ve realized this will be way too long if I include strategies to cope, so those are coming up next week. For now, start with the easy but powerful step of identifying what death, the liminal phase, and rebirth might look like for your particular issue. This way, you have some idea what’s coming and can be dive in with a little more confidence that you will get through it.